The most obvious part of the project so far has been the restoration of the church. On the Completed Projects page you can see some pictures of the work so far in the Sanctuary and side chapels. There is even more information on the Church Tour section of the Parish Website.

We still need to:

Why does so much work need doing?

The Church of St Aloysius was built for the Jesuits in 1875. It was designed by Joseph Aloysius Hansom, a well-known church architect of the time who is perhaps more famously remembered as the architect of Arundel Cathedral and the Holy Name, Manchester (he is also the creator of the Hansom cab).

When first opened, the church was plain and unadorned, but within twenty years it was filled with splendour — a large number of good-quality statues in fine-grained limestone, carved by Farmer and Brindley; some large statues from the famous Munich works; and colourful decoration, much of it by Gabriel Pippett. Unfortunately no colour photographs survive, but we have one watercolour, by Peter Robeson, which gives an inkling of the brightly coloured sanctuary of earlier times. 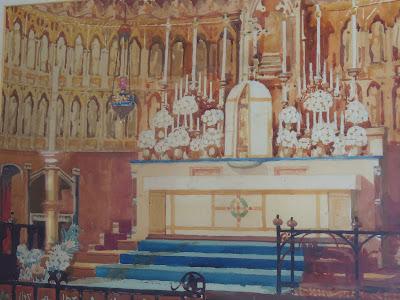 But several expensive mistakes were made during the last century. Victorian art and architecture went right out of fashion, and so in the 1950s the church was painted grey, covering over marble, mosaic, ashlar limestone and a great deal of elaborate paintwork.

We caught a glimpse of one of the lost paintings during restoration work in 2008. It is the face of St Aloysius, by Pippett. We decided to re-cover the painting because we could not afford to restore it at the time. 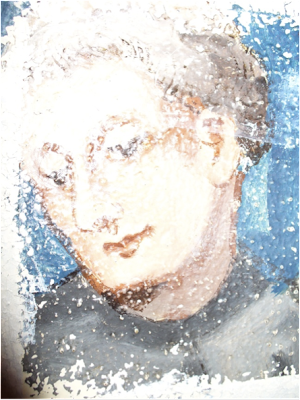 Worse than just covering up the old decoration, the 1950s emulsion paints were plastic-based and waterproof. That means that the damp in the walls could not “breathe” out through the paint, and so it forced paint and plaster to blister and crumble. The results can be seen in several places in the church even today. 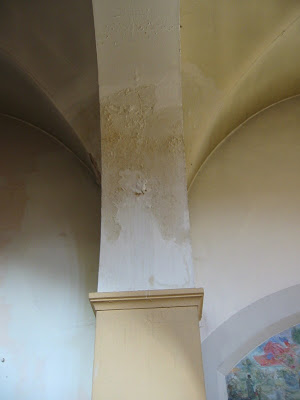 During the 1960s, the decision was taken to re-arrange the Sanctuary, leaving it terribly cramped for today's liturgy.

In the 1970s the church was repainted in “peaches and cream”. But that meant another layer of waterproof emulsion paint, and the painters' ladders did a lot of damage to the stone work around the Sanctuary.

The church was also re-roofed (with nice artificial slates) but the gutter around the entire church was not properly fixed, and rested directly on top of bare brickwork. That meant that the wind could blow rainwater out of the gutter onto the bricks, which trickled gently down through the wall.

Finally, in the 1980s, a new heating system was installed, based on blasting the church with hot air mixed with the products of gas combustion — mostly water vapour. It certainly made the atmosphere warm quickly, but the condensation ran down the walls in torrents, and the walls felt clammy to the touch.

The damp problems have been solved by installing a new heating system and repairing the roof problems. Now the walls are dry, it is time to repair the damage the water caused, both to the structure and the decoration.

The first major work in the church was the redecoration of the Lady Chapel in 2007. The work was carried out by IFACS, the International Fine Arts Conservation Studios, and overseen by their Head Conservator, Richard Pelter. 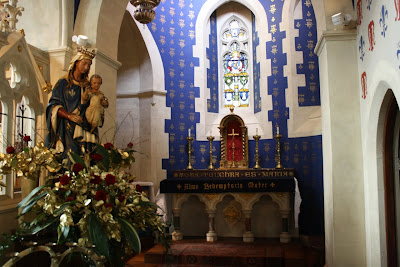 Then in 2008, the drying walls of the Sanctuary caused a large piece of stone to fall during Mass. It was a crocket from one of the attached columns flanking the clerestorey windows. So we scaffolded the whole Sanctuary, consolidated the plasterwork and stonework, and took the oportunity to redecorate the entire altar end, walls and ceiling, again under Richard Pelter and his team. That included the full restoration of the statues and their screen behind the altar. We also put in modern lighting at that end, which uses much less electricity than the old lights. 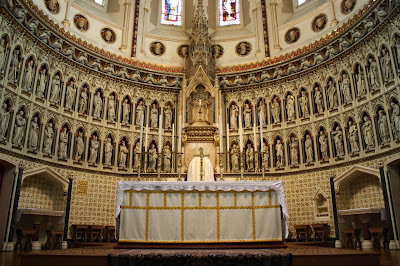 To welcome the visit of the Relics of St Thérèse of Lisieux in 2009, we restored the Relic Chapel, uncovering the original painted decoration where we could, and reconstructing it where it had been destroyed, again with modern lighting. 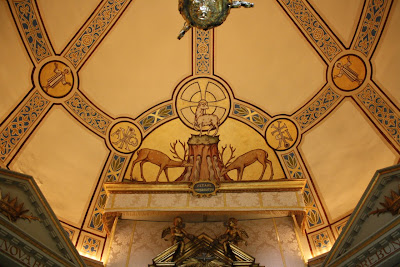 To celebrate the beatification of our founder, we commissioned Tim Newbery to make a small Shrine to Blessed John Henry Newman our Cardinal. It was unveiled two days after the beatification, on 21 September 2010. This is temporary — eventually there will be a whole Chapel to Bl. J.H.N., and the Shrine can be recycled for other Oratorian Saints or Beati. 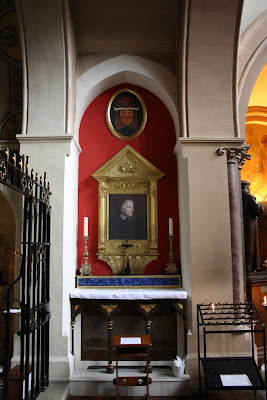 What remains is to restore the marble, stonework and stencilling of the nave, particularly the ceiling. Below you can see a patch of the old decoration that we uncovered. There is not enough of the old paint left on the ceiling to be able to uncover all of them, so new designs for the panels are being prepared. 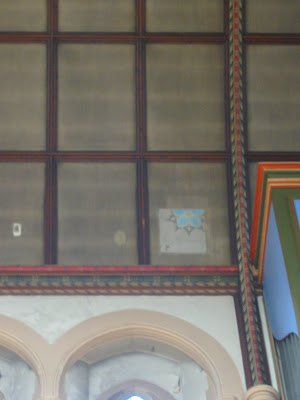 On the walls, above the main arches are panels of exotic marble: we have tested them, and it will be possible to remove the emulsion paint to reveal them once again. 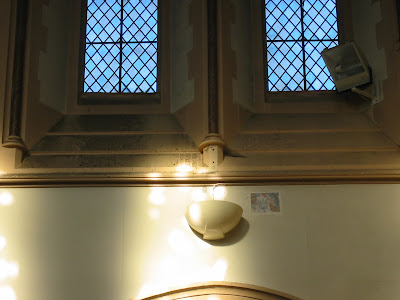 The stonework and plaster will also have to be treated, in the same manner as we have already done in the Sanctary. Once the scaffolding comes down, a lot of the floor needs replacing too. At the same time as this work is being done, it is proposed to complete the state-of-the-art lighting and sound systems.

The remaining side chapels (the Sacred Heart Chapel and St Philip's Chapel), the aisles, and the space under the choir loft will also need attention.

Thus, at last, a restored church will provide a worthy and beautiful space for our daily worship, for the great feasts and solemnities of the Church, as well as the family occasions of Baptisms, First Communions, Confirmations, Weddings and Funerals that are held here.