Perhaps the most ambitious of all our plans is the new chapel, which will be dedicated to Blessed John Henry Newman. The ‘Newman Chapel’ will contain seating for 100, and will be its own self-contained space — bigger and more substantial than any of the existing side chapels in the church.

Many events take place in our church that are too small to fill the whole church, but too big for the participants to fit into a side chapel. (The biggest side chapel, the Sacred Heart Chapel, seats 10.) Small weddings, pilgrim groups on the Newman trail and receptions of converts could all take place in the new chapel.

But the chapel would also be used every week by the groups that meet regularly at our church, especially the Oratory groups: the Brothers of the Oratory, Women's Oratory and Young Oratory. Most purpose-built Oratories (including London and Birmingham) have dedicated chapels or Little Oratories specifically designed for their Oratory groups to meet in.

The new chapel could also be used at the same time as the church. For example, we would want to use it for the Children's Liturgy during the 9:30 Mass every Sunday.

It would also serve as an important overflow space — on many Sundays, the High Mass is ‘standing room only’; on days like Good Friday, the crowds are clustered around the doorway and outside. The new chapel would, apart from providing the extra seating, also be equipped with speakers and, possibly, even a screen that would allow another 100 people to follow what is happening in the church. 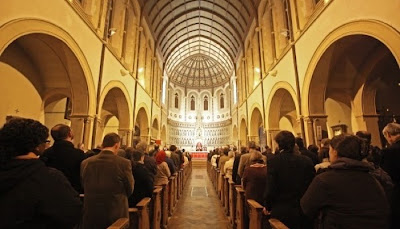 The design for the Newman Chapel is based on the chapel at Propaganda Fidei, where Newman celebrated his first Mass. It is designed by Anthony Delarue in the Baroque style — the style usually associated with the Oratory. It has natural light dropping from a cupola into the central space. The altar will be on the long southern side, not one of the short ends, but this will provide for the maximum number of seats, and has good Roman Baroque precedents. Natural light comes in from the south, where there will also be a small sacristy. In the north-west corner will be a small pipe organ in the gallery. On the end wall there will be a large picture or sculptural group. 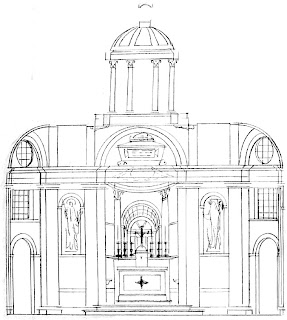 Below is the cross-section looking South. On either side of the altar are niches which will, one day, hold statues; behind the altar is a curved recess, not quite as deep as it appears to be, but with an amber glass half-dome above it, so that golden sunlight will fall onto the altar at all times. Our architect has drawn a sarcophagus-reliquary on the beam above the altar: that was before we discovered that Newman had taken steps to ensure there would be no substantial relics. Maybe there could be a sculptured group there, lit from behind, like Bernini's well-known St Teresa.

Here is the architect's impression of the altar basking in golden sunlight. The Baroque style was Newman's choice when he attempted to found the Oxford Oratory in the 1860s, and the reasons he gave then are still true today. The Oratory is a child of the sixteenth century in Rome, and the Chiesa Nuova (the church of the Roman Oratory) is a prime example of Roman Baroque, with the adjacent Oratory buildings by Borromini. Gothic, Newman pointed out, is more expensive: with Baroque you can add a lot of the decoration, sculpture and paintings later. In a Baroque church everyone can see the altar and the pulpit — ideal if you have Exposition of the Blessed Sacrament — and frequent Preaching, both of which are Oratory specialities. In any case, Oxford has already enough fine specimens of Gothic. Our Oratory Baptistery, Chapel and Cortile will be unique, and should get us into the next edition of the Architectural Guide Book. 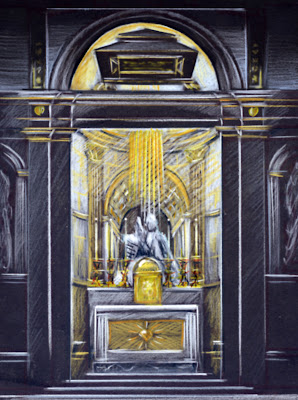